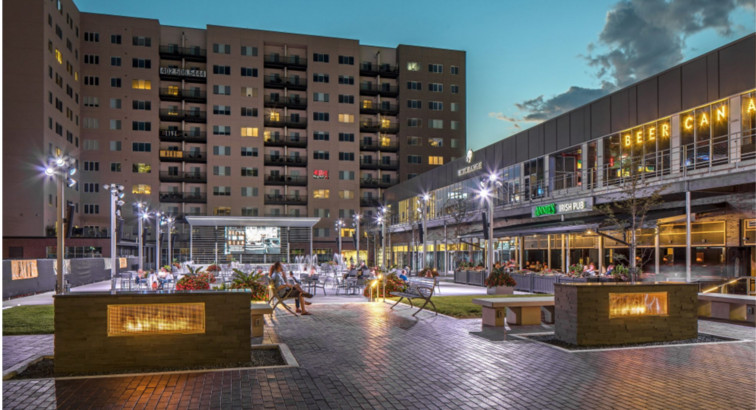 Capitol District is well known to Omahans for its delicious food, exciting nightlife, and luxurious amenities. If you walk through the streets of downtown on any given weekend, you are sure to encounter sweet melodies coming from Moe & Curly’s or the rowdy cheers from young adults two-stepping in Beer Can Alley. This two-block community is nestled between 10th and 12th Streets, south of Davenport.

Developed by Shamrock Development Inc, it aimed to “create a vibrant, walkable enclave that is unlike anything else in downtown,” said David Hawes, an architect who worked on the project.

“The design invites visitors who may feel isolated in the events district to experience the real Omaha, while also creating a comfortable, active place for residents to live, work, and play.” It is the ideal party destination, hang-out spot, and eatery conglomerate that attracts people from all over the city and across the region.

In Capitol District, you can find:

The Capitol District, over the past four years, has transformed a stagnant area of the Omaha landscape and transformed it into a vibrant neighborhood for the community to enjoy.

It's About The Omaha Community

This Omaha neighborhood was designed to promote community activities and access to free entertainment. Modeled after a modern town square, it attracts fun-seekers to live, eat and drink all in the same community, and it connects the newly developed Riverfront district, Old Market, and Charles Schwab stadium in a central location. Everything is just a scooter ride away!

The Capitol District is excited to announce two new additions to the entertainment district:

Both of these are exciting new restaurants coming to the Capitol District and the Omaha community. According to Omaha Food Magazine representative, Sara Sabaliauskas, these concepts are perfect for the area. “Most restaurant customers pull from a three-to five-mile radius. The proximity to the ballpark, tourist destination and, event venues, the CHI Center make these two concepts a great fit. The Captiol District will do a great job of building top-of-mind awareness among locals and tourists alike."

Dallas-based Brazilian steakhouse Texas de Brazil is building its first Nebraska location in Capitol District. Construction on this three-story restaurant began in early 2022, and it is expected to be completed this fall. You may have just seen their new sign go up!

Texas de Brazil combines traditional, Brazilian churrasco cooking with the generous spirit and hospitality that Texas is known for. Their website states, “In southern Brazil, local cowboys called gauchos, prepare legendary feasts in a tradition known as churrasco. They slow-roast meats over open flames and present an impressive display of seasonal greens, vegetable dishes, and regional delicacies.” Texas de Brazil currently has over 50 locations, but its company is still family-owned.

Let it Fly Sports Bar is owned by two-time NBA champion Mike Miller whose son is on the Creighton Basketball team. He decided to open his first Nebraska location in the south building of the Capitol District to serve burgers, beer, and brunch to hungry downtown residents.

Let it Fly also doubles as a game room, as both its Germantown and Sioux Falls locations have unique “play” features. Whether you’re looking for green tea shots, trivia, live music, or games, this sports bar will be an entertainment palace. According to Boh Kurylo of The Lerner Company, Let it Fly is moving into the 9,500-square-foot bay on the East end of the plaza, neighboring The Jewell and the Society 1854.

Ryan Miller with Let It Fly said they intend to open their new location between March and June of 2023. This location will be unique as it will feature a state-of-the-art video wall 10’ x 48’. It will be like no other place in town to watch Creighton win! This new space will also have a high-tech podcast booth where podcast hosts can bring local celebrities on their shows.

Miller said that they chose Capitol District for their new location because they wanted to bring a top-notch sports-themed restaurant to downtown Omaha that brings even more life and energy to the community. We can’t wait for opening day!

Capitol District has become a favorite entertainment destination for young adults, The Bachelor lovers, and Omaha foodies. Grab a taco and a beer from Epoca Cantina and enjoy the free wifi in the open plaza, or cuddle up this winter with seven of your closest friends and enjoy a burger in Capitol’s Igloos.

Take your family to watch the next Husker game projected on the big screen, or catch a Sinatra Sunday performance at The Jewell. Regardless of your interests, Capitol District has something to offer everyone.

With the addition of Texas de Brazil and Let it Fly, the Capitol district will bring even more fun to the community and the surrounding Omaha neighborhoods. There is only one large retail space remaining–7,500 square feet–in this community, and Kurylo says a brunch establishment would be an ideal fit.

Capitol District lives up to its “Live, Work, Play” vision, but as Omaha continues to grow and develop, so will this pocket of downtown. We can’t wait to see what comes next!

If you’re looking to visit Omaha or explore the Capitol District community, contact an Omaha Real Estate Company. Nebraska Realty agents are ready to help you get started in your home or condo search!